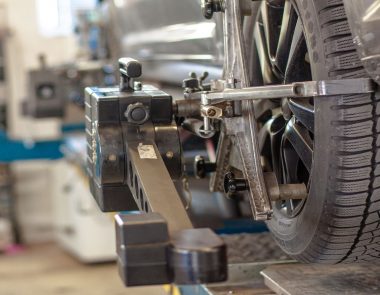 When replacing just two tires, intuition suggests that the new ones should be installed on the front axle, but this can be dangerous. Most automobiles are fitted with the same size tire at every wheel position. Preferably, all the tires should be of the same type and have the same tread depth. This is meant to help retain the handling balance engineered into the vehicle.

It’s normal for front tires to wear faster than rear tires due to their responsibility for transmitting steering, acceleration, and most of the braking force. If the tires aren’t rotated regularly, it’s likely that the rear ones will still have about half of their original tread depth remaining.

The worst combination for driving dynamics and handling is to have new tires on the front axles and worn tires on the rear. Incorrect placement of replacement tires can lead to oversteer, understeer, and hydroplaning.

Hydroplaning takes place when a tire fails to process enough water through its tread to ensure effective contact with the road. When it rains, water can pool up in road depressions, ruts, and pockets adjacent to pavement joints. At higher speeds, this pooling water challenges the ability of a tire to resist hydroplaning. The occurrence of hydroplaning depends on water depth, vehicle speed and weight, tire size, air pressure, tread depth, and tread design. In a heavy downpour, a lightweight vehicle with wide, underinflated, and worn tires will hydroplane at lower speeds compared to a heavyweight vehicle with new, properly inflated, and narrow tires.

When the front tires have significantly less tread depth, they’ll begin to hydroplane and lose traction before the rear tires. While this will cause the skidpad to understeer, it’s relatively easy for the driver to maintain control because releasing the vehicle will slow down when the gas pedal is released. However, when new tires with significantly more tread depth are installed on the front axle, the rear tires will begin to hydroplane on wet roads before the front ones.  This will result in oversteer – an action that involves the back end trying to steer the vehicle, causing the rear tires to slide sideways. Oversteer is far more difficult for drivers to control. Trying to quickly release the gas pedal or apply the brakes to slow down will lighten the rear of the vehicle and possibly cause a complete spinout.